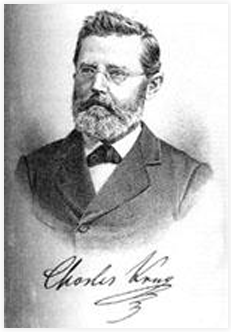 Napa Valley is a world-renown, iconic wine region, and St. Helena is where it all began. Grape growing dates back to the Mexican land grants in the 1840s when General Vallejo gave European settler, Edward Bale, a wedding gift of property in the small town of St. Helena. Bale and his bride promptly planted the acreage to Mission grapes and watched them thrive. Today, that land is known as Beckstoffer’s Las Piedras vineyard, and is one of Napa Valley’s most acclaimed.

Recognizing the quality of the diverse soil types and consistent weather patterns, others such as Henry Pellet and Dr. George Belden Crane began to plant their land to grapes as well. Thanks to these natural conditions and the pioneering spirit of early settlers, St. Helena’s wine industry was underway. In 1861, Prussian immigrant Charles Krug founded his winery, a venture that would lay the foundation of innovation and leadership for which St. Helena is known to this day. By 1880, over 100 people were making wine in St. Helena.

In 1873 Charles Krug and Henry Pellet combined their wine lots and shipped them back east. Unfortunately, because they were made from Mission grapes as opposed to European wine grape varieties, buyers were not very receptive. The following year, Charles Krug traveled east and was met with the same resistance once again. A glut of wine was accumulating within the budding wine community because sales were slow, the country was entering a recession, and low import tariffs allowed French wines to dominate the market. To make matters worse, Phylloxera had begun to spread throughout California and vine health was of great concern.

At this same time, the president of the State Agricultural Society published a report confirming that the perceived quality of the wines made in California would not be improved until Mission grapes were removed altogether. This news could have deterred some from continuing with their endeavors, but for Charles Krug, Henry Pellet, and Seneca Ewer, it was the catalyst needed to create lasting change that would shape the future of Napa Valley’s legacy forever. On December 18th, 1875 the three met to discuss their options and devise a strategy that would turn Napa Valley into the world-class winemaking destination that it is today.

Their solution was to gather their fellow vintners and business leaders and commit to working together to improve the quality of the region’s grapes and elevate the perception of the wines. The group called themselves the St. Helena Viticultural Club, meeting twice a month, establishing the spirit of collaboration and goodwill that still strengthens our winemaking community today. As modern day vintner Fulton Mather commented, “It was Charles Krug who urged at the very first meeting of the club, that in order to win the respect of wine connoisseurs on the east coast, it was not enough just to declare that we own possibly the best soil and climate on earth for growing grapes. We must harvest and produce wines made from the world’s best varieties from this appellation. The direction for St. Helena was forever set at that meeting.”

Their accomplishments were numerous; by the close of the century, the vintners began to see increased interest in Napa Valley wines. According to historian William Heintz, they began “…collecting and publishing statistics showing the superiority of our climate and the great fertility of our soil.” Charles Krug used the club to educate the members about the need to plant foreign grape varieties instead of Mission grapes, and a sub-group was formed to deal with the problem of Phylloxera. After much lively debate, they also agreed to sign a pledge eliminating chaptalization. By 1878, a 40 foot by 135 foot bonded warehouse was built and 1880 saw the opening of a two-story Vintners Hall with offices and meeting space.

The St. Helena AVA was officially approved in 1995, its boundaries defined by Zinfandel Lane to the south, Bale Lane to the north, the intersection of Howell Mountain and Conn Valley Road to the east, and the 400 foot elevation line of the Mayacamas Mountain range to the west. Today, St. Helena remains the epicenter of Napa Valley wine. The ingenuity, tenacity, and partnership of the industry’s founders live on here, informing all that we do. In 2004, the vintners who had worked together to get the AVA approved, decided to officially resurrect the St. Helena Viticultural Club after a long hiatus that started around the time prohibition began. “We formed this group to focus the public on the exceptional quality of the wine produced with the St. Helena appellation,” explained Beth Novak Milliken, the group’s first president. The club’s modern day moniker is Appellation St. Helena.